The surgical treatment of high myopia has always been very challenging. Options include LASIK, PRK, Refractive Lens Exchange (RLE) and phakic IOL’s. LASIK is not often used for high myopia above -10.00 to -12.00 D due to the risk of ectasia ( surgery induced keratoconus ), which can create significant visual issues, including the need for a hard contact lens or corneal transplantation to function.

RLE, which involves removing the natural lens of the eye with phacoemulsification and replacing it with an IOL, is a quite viable solution for the treatment of high myopia in patients over 50. The main risk of RLE is the increased risk of retinal detachment. For all of these reasons, phakic IOL’s have become the standard of care for the treatment of high myopia in the US and have become more popular for moderate myopia. The 2 options for a phakic IOL in the US are the AMO Verisys and the Staar Visian ICL. 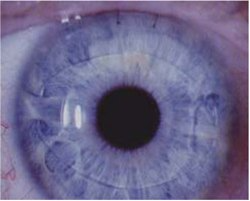 The AMO Verisys phakic IOL (Fig. 1) was the first Phakic IOL approved in the US. This “iris­claw” lens is a I-piece PMMA lens that is implanted through a large 6 mm superior incision and then the haptics clipped to the anterior iris. This lens is approved for the treatment of myopia from -6.00 to -16.00 D. Visual outcomes are good, but the surgery is quite challenging and involves creation of a large superior incision requiring sutures to close. Because of this large incision, against-the-rule astigmatism is frequently is induced, which may require further refractive surgery.

Internationally, this lens comes in a foldable version, which reduces the incision size and induced astigmatism. The surgery is rather lengthy, taking 30-40 minutes per eye. There can also be issues with chronic inflammation with the Verisys due to the attachment of the lens to the iris and issues with displaced lenses due to damage to the iris by the claw. With a displaced Verisys lens, a return trip to the OR with re-inclivation of the haptic to the iris is required. Because of these issues, the Versys lens is now rarely used in the US and represents less than 3% of the domestic phakic IOL market. The Visian Implantable Collamer Lens (ICL ), manufactured in Monrovia California by Staar Surgical, was approved by the FDA in 2005 for the elimination of moderate and high myopia from – 3.00 D to -16.00 D and reduction of myopia up to – 20.0 D . (Fig 2). This lens is the most popular phakic IOL used in the US, representing over 95%of these cases. The lens is inserted through a small incision in front of the natural lens behind the iris in the ciliary sulcus. The idea for ICL’s came from Svyatoslav Fyodorov MD ( of Radial Keratomy fame) in the late 1980’s based on IOL’s used for cataract surgery.

The first ICL was implanted in a human in 1991 and since then, over half a million ICL’s have been successfully commercially implanted. Benefits of ICL Figure 2 over LASIK include a better quality of vision, reversibility, better night vision, lack of dry eye, ultraviolet blocking, safety with thin and abnormally shaped corneas, and more accurate IOL calculations at time of cataract surgery. Because of this, in many clinics, ICL is replacing LASIK for patients who are -6.00 D and above.

In patients who demand the highest quality of vision such as very picky patients and airline pilots, phakic IOL is offered at all levels of approval. For patients with severe dry eyes, severe allergy or other ocular surface disease, thin corneas ( calculated residual pachymetry after LASIK below 250 u), large pupils, corneal scars and abnormal corneal shape, ICL is offered starting at -3.00. Visian ICL has also been successfully used to treat refractive error associated with keratoconus.

The best candidates for phakic IOL performed in the US are those patients with moderate to high myopia between -3.00 and-20.00 to -25.00 D (- 25.00 is the highest that I have treated by performing bioptics – LASIK or PRK 3 months after placement of the phakic IOL for the myopia). The patient must be between 18-50 years of age (the FDA labeling for both phakic IOLs states 21- 45, but slightly older and younger patients also do well). We do not perform phakic IOL in those over 50 because the risk of cataract formation.

In moderate and high my opes ( as well as hyperopes) over 50, we recommend refractive lens exchange, despite the higher risk of retinal detachment. We require that patients have healthy corneas with a cell count of at least 2000 cells/mm2. The FDA labeling states that the patient is required to have at least a 3.00 mm anterior chamber depth for both Verisys and Visian ICL. However, we routinely and safely implant the Visian ICL in patients with an AC depth of 2.55 mm or more. The AC depth requirement for Verisys is always 3.00 mm because of the anterior positioning of the lens. Other inclusion criteria for phakic IOL’s are similar for LASIK including refractive stability and lack of other ocular pathology including cataracts.

Internationally, the ICL treats up to -6.00 D of astigmatism. In the US, only the spherical version of the ICL is available. Traditionally, the 3.00 mm incision for ICL is much like a cataract incision in terms of placement temporally. We perform an on-axis incisions (ie at the meridian of highest corneal power) for 0.50 to 1.25 D of astigmatism. For patients with 1.50 to 2.50 D of astigmatism, paired 3.00 mm incisions are made on-axis. For patient with more than 2.50 D of astigmatism, if adequate corneal thickness, LASIK is performed bilaterally 1 week prior to the placement of the phakic IOL. For those who are not LASIK candidates, we debulk the astigmatism with paired on-axis incisions and then perform a PRK enhancement for cylinder 3 months later after the phakic IOL.

The pre-operative work-up at your office is identical for both phakic IOL (Verisys and Visian ICL) and LASIK. History, pupil measurement in scotopic conditions, manifest and cycloplegic refractions as well as slit lamp and posterior segment examination are all required. To maximize accuracy, we recommend perming a soft contact lens over refraction for those who are 10.00 D and above to minimize the effect of vertex distance on the measurement. In our office we will perform a diagnostic ultrasound with a UBM to obtain a sulcus to sulcus (S-S) measurement to size the ICL.1 (Fig. 3) Most surgeons guess S­S by measuring the external white­ to-white. UBM S­S makes sizing much more accurate in my Figure 3 hands to minimize risk of cataract or pressure spike after surgery. We will also perform endothelial counts and measure AC depth with the UBM and Orbscan as well as perform the informed consent.

Visian ICL surgery is performed on both eyes on the same day in our office and the surgery takes about 6 minutes per eye. A surgical iridotomy is performed at the time of surgery to prevent pupil block because the ICL can block aqueous flow from the posterior chamber to the anterior chamber. The patient will feel irritation and have blurred vision for the rest of the day, but most patients clear up and are able to return to work the day after surgery. Limitations are similar to cataract surgery, where we ask the patient not to swim, lift more than 20 pounds or bend past their waste for 5 day. The patient will be asked to use an antibiotic and steroid three times per day for 1 week. We typically use a compounded combination drop with prednisolone and gatifloxacin for patient convenience, but individual drops work just as well.

Post-operatively, you will typically see phakic IOL patients at one day, one week, one month and three months. At three months, if there is any residual refractive error (typically astigmatism), you should refer the patient back for laser vision enhancement. At each post-operative visit, you should check uncorrected vision, intraocular pressure and lens vault. Lens vault is defined as the distance between the back surface of the ICL and front surface of the natural lens as seen with the slit beam and is recorded in % corneal thickness – ie a patient whose vault is a thick as the cornea is said to have 100% vault. Acceptable thickness is between 20% (100 u) and 200% (lO00u). Vaults lower than this are at risk for premature cataract formation, vaults higher than this are at risk for high pressure.

The most common risk of phakic IOL surgery is residual refractive error (typically cylinder) after implantation. The risk of needing additional laser vision correction after ICL is about 5% ( and in my hands, closer to 35-40% when we were performing Verisys) and the risk is highest amongst patients with 1.50 D or more of pre-operative astigmatism. The one risk unique to ICL is premature cataract formation, which occurred 1.3% of the time in the US FDA Study.

Risk factors for cataract after ICL include age greater than 40 and myopia of -13.00 D or more. Pre-mature cataract formation could theoretically occur in younger patients with lower myopia, but in my 18 years of performing ICL, I have never seen a cataract in a patient under age 40 and less than -10.00 D.3 Other theoretical risks of ICL surgery include infection ( only a single case has ever been reported in the literature) and acute glaucoma either from an oversized ICL or blockage of the iridotomy.

The former is treated with an ICL exchange for a smaller sized lens and the latter treated with an additional surgical or laser iridotomy. I have never seen oversized lens syndrome since measuring sulcus-to-sulcus with a UBM ultrasound. Halo and glare in low light situations can occur, but less commonly than with LASIK. This is typically treated with bromidine drops as needed to shrink pupil size in low lights, but could be treated by removing the lens if severe. The US Army conducted a study comparing ICL and LASIK using the most modem laser and found that in conditions simulating the use of night vision goggles, ICL patients had much better vision than LASIK patients.

Internationally, the Visian ICL is available for virtually any refractive error including myopia up to -18.00 D, hyperopia up to+ 10.00 D and astigmatism up to 6.00 D with or without hyperopia or myopia. In our practice, we currently offer these technologies in Costa Rica for appropriate patients. The other technology offered outside the US that increases the safety of the procedure is the C-version of the ICL that has a central hole in the lens to prevent pupillary block. This version of the lens obviates the need for an iridotomy and may decrease cataract risks by allowing the front of the natural lens to be bathed with aqueous. The other exciting innovation that will be coming to the ICL in the future is the addition of an increased depth of focus optic for presbyopia.

In summary, the surgical treatment of high myopia has proven rather elusive until the evolution of phakic IOL’s. Both Verisys and Visian ICL are safe and effective for the treatment of moderate and high myopia and can treat virtually any refractive error internationally. Visian ICL is the most commonly performed phakic IOL in the world, and is most appropriate for myopes above -6.00 D, severe dry eye or ocular surface disease, thin or abnormal corneas and patients with very precise visual needs.